I had to make a correction to my last post. As I was waking up this morning I thought again about the movie “the never ending story” and pictured the kid reading the book. I had the kids name way wrong, I don’t even know his real name, so I corrected it. I did however make it to the bridge I was aiming for and I posted a picture of my hammock set up for last night. You know, I brought a hammock for the Florida trail because I thought I would encounter a lot of trees along the way, but so far I have hung off man-made structure more than natural ones; 5 to 3 :). Things might change once I get north of Okeechobee though.

Today has been the craziest day so far in unplanned changes. The first 10 miles were as planned, and I made them all by noon today. My feet still hurt the same but my ritual of shorter strides and tending to my feet at lunch has kept me progressing quite well. At my lunch stop, I noticed my phone had gone up a little in charge and my solar panal is finally being productive. So, to whomever said the right prayer or “believed” enough in it working, thank you for your effort.

I ate lunch on the south shore of lake O’ and under the shade of a covered picnic table. The view is so much nicer than the endless sugar cane fields of yesterday I and really soaked in its beauty. At my personal covered picnic table I hung a clothes line to dry my socks and other damp gear damp from the recent rain and relaxed for about 45 minutes. I knew I still had 10 more miles, but at the pace I have today I wasn’t worried about the time. I packed everything up, put on new socks and started in on the second half of. The next 4 miles went as good as the first 10, and it was barely past 2pm when I checked the time. I thought today was going to be my first 20 miler, but that’s when the issues started.

I met a man from the Army corps of engineers who told me that the levy is out up ahead and I had to detour through Clewiston. He told me to go to the marina (1/2 mile out the way) and that they would have a map of the changes. Seemed easy enough but after standing in line at the busy marina for about 15 minutes (there’s a fishing tournament today and tomorrow) the lady asked if I wanted a water depth chart. I explained my situation and about how I am on a through Hike of the Florida trail, so she again looks intently at her water chart of lake Okeechobee and then at me to say “I’m not sure this thing has the trail on it, let me call the manager”. I stand around burning day light as she helps the Fishermen check in, while all the time reassuring me her boss will call back soon. I finally give up and power on my phone to see if the map app has the change or route on there, which is what I should have done while talking about the rerouted trail eailer. Sure enough, there marked as a blue line is my new course and with about 60% battery power, I should get underway. I wave to the sorta helpful lady and start on the “blue blaze” that will eventually lead me down a highway through town. At about 4pm I realize that I am not even going to be out of the city before dark and then it’s still a few more miles past there before I’m able to get on the trail. I was hopeful for a 20 mile day, but not a 25 mile day just to be out of the city, so I had to make a hard unwanted decision and stay at a motel. I pick the seediest of joints and walk in to ask how much for a night. The lady at the counter, dressed in braids, beads and fake gold everywhere looks up into the air at her imaginary nighty rate table and tells me $69.99 in her thick Pakistani accent. I laughed lightly and said no thank you and walked out towards the second seediest joint around. Greeted by a very similar lady, I expected the same response, but she gave me a room for $55.00. Still way more than I was wanting to spend, but I can plug my charger into the wall, take a shower and do laundry at the coin laundromat across the street. So even though I have been thrust back into civilization unplanned, I am making the best of it for now knowing I will be hanging my hammock in some new place, many miles from here tomorrow night. 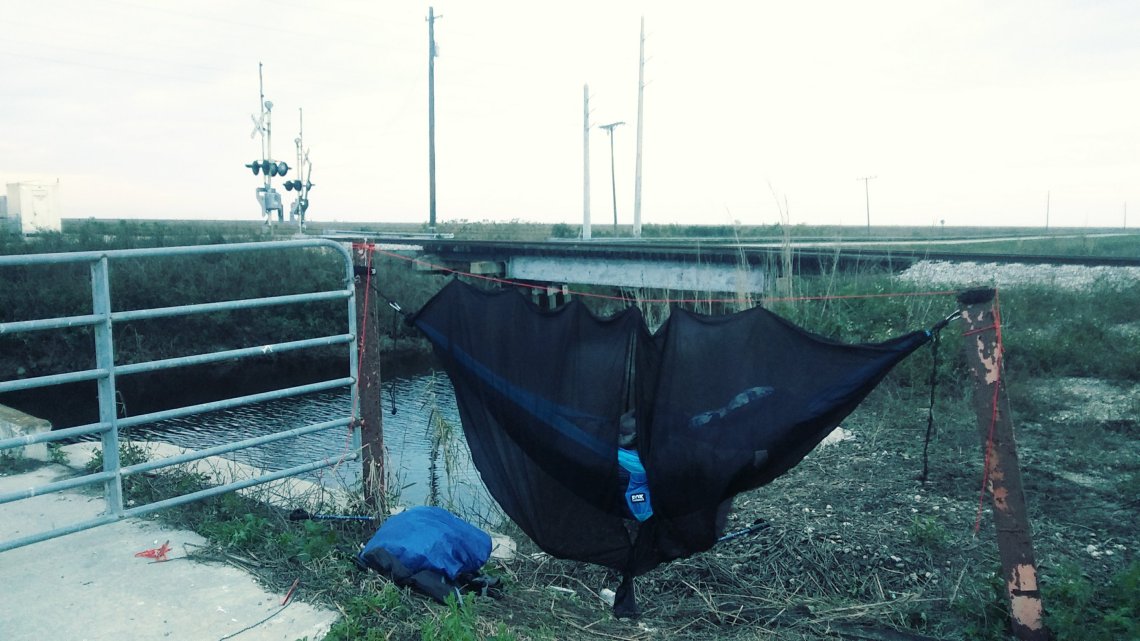