The hotel experience last night wasn’t a totally bad experience. The shower head although barley mounted and bent, spit out warm water and the t.v. had a fuzzy weather channel but the sound came through well enough to hear clearly ( I learned that sunday this side of Lake O’ will have 2 – 3 inches of rain!). In what could have been a bad experience, I found out that whomever mounted the toilet paper holder probably didn’t pass their geometry class because the door swing was once interrupted by its mount. I say “once” because the toilet paper holder is no longer there and the bathroom door has a hole on the backside of it from the series of misfortunate events. The problem though is that since bathroom no longer had a toilet paper holder, it has been forgotten by the cleaning staff to stock a roll in there (luckily I carry my own). I made it to the local laundry mat as they were closing (is this town such a bad neighborhood that the coin laundry closes at dark I thought?) but since I look homless and needy, the lady let me wash my clothes while she cleaned the building. I offered to clean for her since I was there past closing but she politely refused. Another thing that happened eailer yeaterday that I forgot to mention was that when I entered town I stopped at an outdoor mexican “eatery”. The food was cheap and delicious and I could sit my homeless looking self outside where I belong. After I scarfed down my food and I got up to leave, a lady asked if I was a Vet (it says “veteran” on my hat with my maintenance badge and retirement pin on it and it’s hanging from my bag) I tell her yes and over explain my situation for her because she hands me a $20 and says “next meals on me”! Man I must look pretty rough, but I say thank you very much and press on. At about 11pm after trying to sleep for about an hour I decided to go to Wal-Mart for a new wall charger so I could be charging both my phone and battery pack (that is taking the wall power fine) and set out on a night adventure through Clewiston. All was smooth in my nightly quest amd I even walked past a cop car who didn’t bother me. This town may look a little rough around the edges, but I’ve had a positive experience on my detour.

This morning a welcomed visit from my friend Josh who drove out to help me on my first resupply run. I needed food and some other odds and ends to replace gear or improve my current set-up. First order of business was to find a diner to eat at, but to the best of our efforts we couldn’t find one in Clewiston. We settled for gas station type fare and enjoyed a conversation about the coming weeks route and planned miles. Wal-Mart had everything I needed (except tent stakes that Joah brought with him) and as I loaded my food bag, Josh waterproofed my rain fly which is about to get a workout tonight. The visit was short as I needed to get moving and we parted ways at 10:10am. His visit and help was a real morale boost and even though my pack is back around 50 pounds, I have new motivation to press on. I hiked the rest of the blue blaze back to trail watching a sugarcane harvest in progress and could smell the sweet grassy smell for miles. The blue blaze added 4 miles not counted in the daily tracker, but hopefully the next one will be a short cut and even things out.

Once back on the orange blazes of the Florida trail I heard a lot of gun shots from the far side of the Levy and couldn’t resist seeing what was going on over there. It was two young guys firing off rounds into the weeds so I stopped and chatted with them saying “those sound like 9mm’s (I was right) and they let me hold their guns and play around with them while we talk about shooting for a bit. Another mile down the trail I met a Flipflop SOBO’er named “treehouse” who is quite an experienced hiker with time on the PCT and AT. His pack looked half the size and weight of mine, but I guess that’s what experience brings you. When we parted ways I took a short water break at a covered picnic table and decided to do only five more miles to a covered bench just a few miles outside of Moore Haven Fl.

Something else I forgot to mention was that yesterday as I entered Clewiston and was walking across the street, a truck turned the corner and I had to run across to keep from possibly getting hit. Not cause I was in the wrong (I had a walk signal) but because I value my life :). Anyway, when I stepped up on the slight curb I felt my right Achilles tendon twinge just above my heal. It wasn’t a big deal yesterday but it played a factor in the rest of my day. As I left my break spot, it started to rain. Just a drizzle really, (the kind that if your leaving the store you keep walking to your car) but it kept on raining for hours. As I wanted to make camp, I opened my stride a bit to make faster ground but then came the pain above my right heal. I tried to ignore it, but it hasn’t stopped bothering me since it started. Hopefully tomorrow it’s gone but for now it’s a slight concern. When I finally got to my assumed camp spot I relized from a distance that it wasn’t going to work. The wooden posts were too close together and I would just have to press on all the way to Moore Haven, which I did. The rain has stopped for the time being which was great because I didn’t want to set up camp in the rain. But the work is done, I can finally relax my leg, tend to my feet and eat a good meal before bed. The storms are about to start in an hour or so and they are still saying 2 to 3 inches of rain, so hopefully my lines hold on the tarp and I can stay mostly dry tonight. I’m excited for what tomorrow may bring, but I’m pretty sure it will be a low mileage day if it’s pouring out. 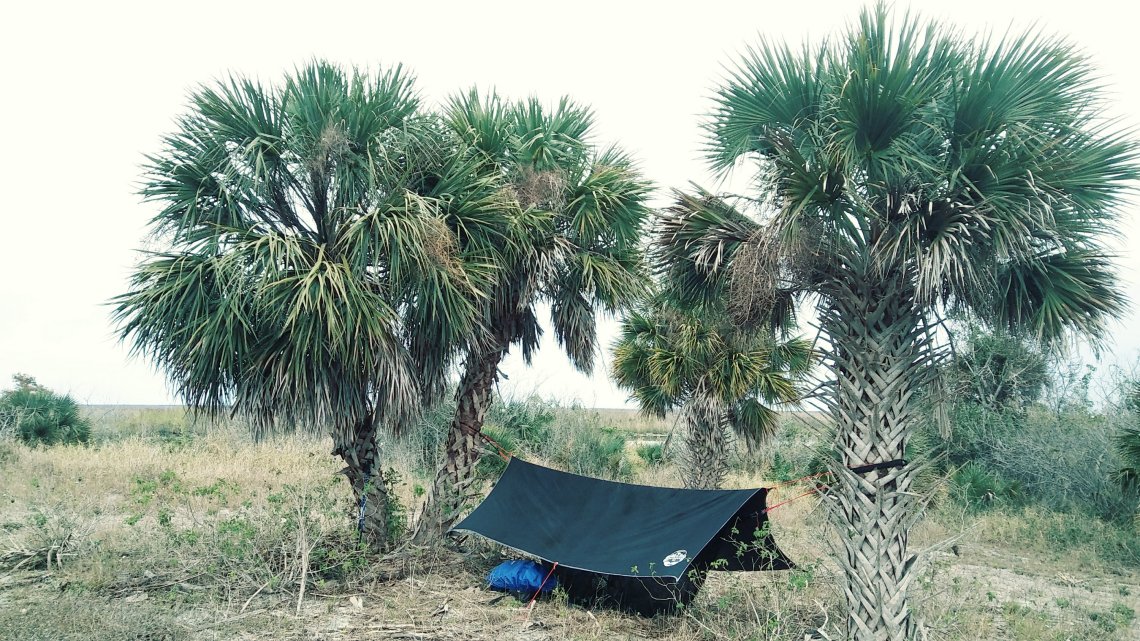