Holy cow, there was way too much wildlife at lastnights camp! First it was the running beast, followed by an armidillo with half its tail missing from a previous battle that came through shaking the palm fronds. I was glad to see it was just a harmless armidillo but curious about what got its tail for a snack. About 30 minutes later, two raccoons came by to visit. I was shinning my light right at them, telling them to leave me alone, but they kept coming towards the soft glow of my LED light, right up to within 15 feet from me! I took my trekking pole and slapped the palm fronds which finally got them to scatter. The problem was that one raccoon went north and the other went south, which caused confusion amongst them as they tried to pair back up around me. Another armidillo (with a full tail) came waddling through camp around 10pm. I know armidillo’s are harmless, but it raises the blood pressure and chills the spine as they are inbound through the palms. At about 1am the coyote started howling from about 100 yards away. That distance is close enough to fear that they might smell me and get curious enough to check me out. Not to be forgotten was the trio of raccoons that came charging my camp at 2am. I’m not sure if they were running towards me or AWAY from something. This time I went straight to slapping the palm fronds with my trekking pole which was effective in stopping their charge and caused a misdirection in all of their paths. That’s all the animals I could see/identify, but there were many others that were gosts in the night. In what should have “quiet hours” my time was spent running off critters instead of sleeping. Although I enjoy the solitude out here, I can also see the benefits of hiking with someone.

Well with morning light came the time to break down camp. I moved quickly as I had a long 23 miles planned, but as I was leaving camp I slapped the palm fronds a few times to wake up all the critters that kept me up last night :). The first mile or so out of camp was a beautiful trail, recently mowed and marked, through someone’s property. It’s awesome that folks allow the trail to pass through their land and keep it maintained. As I transitioned from the trail to the road, I turned off my phone (it’s still dropping a full charge in a few hours) and followed the orange blazes marked on the power poles and down on the road for a few hours. I got to one spot where a decision had to be made. Take the trail or keep on the road that bypasses the wetlands. Not wanting to get my feet wet today (I’ll have enough of that tomorrow) I took the road. I followed that to a community center with picnic tables, and had lunch at mile 8 for the day. Still having 14ish miles to go, I decided to skip the second wet section of trail and keep to the road for faster travel. I was feeling pretty good and pacing at 3mph so I figuring I had about 3 hours to go before I should be checking my map app again. Well, here was my mistake. Feeling so full of energy from lunch, I started down the road at a full speed march and kept on trucking until I crossed the Kissimmee river. Once across I saw a monument sign and thought to take a picture (see below) and since my phone was on, I checked my map to see in horror that I had just spent the last 30 minutes or more fast stepping it, down the wrong road. I checked to see if there was anyway to reconnect with the trail, but unfortunately I would have to back track the mile and a half. As I was nearing where I ate lunch, I came to where the trail crossed the road. I thought instead of my original plan of road hiking the next 12 miles, I’d go ahead and take the seemingly dry trail. Well, I got about 3/4’s of a mile (maybe more) of stepping around the swampy-ness that i could see that the trail was becoming impassable without wadding. So I turn around, again, and went back for the road. All in all I did about 28 miles for the day. That’s more than a marathon and more than I have ever travelled on foot in one day! I did get to see a lot of farm land and grazing cattle. I unfortunately also saw calves that were pinned up for future veal (picture below), and in the last cow field (not a mile behind me) had a dead cow that had been taken down by bites around his neck and had its rear end eaten to the hip bone. It was pretty graphic, but also evident that I’m not fully out of panther territory yet. Tomorrow I’m hiking through the alligator infested waters for 20 miles to my next camp, at least that’s the plan. I hope I still have signal when I get through it, but if not I will post when I can. 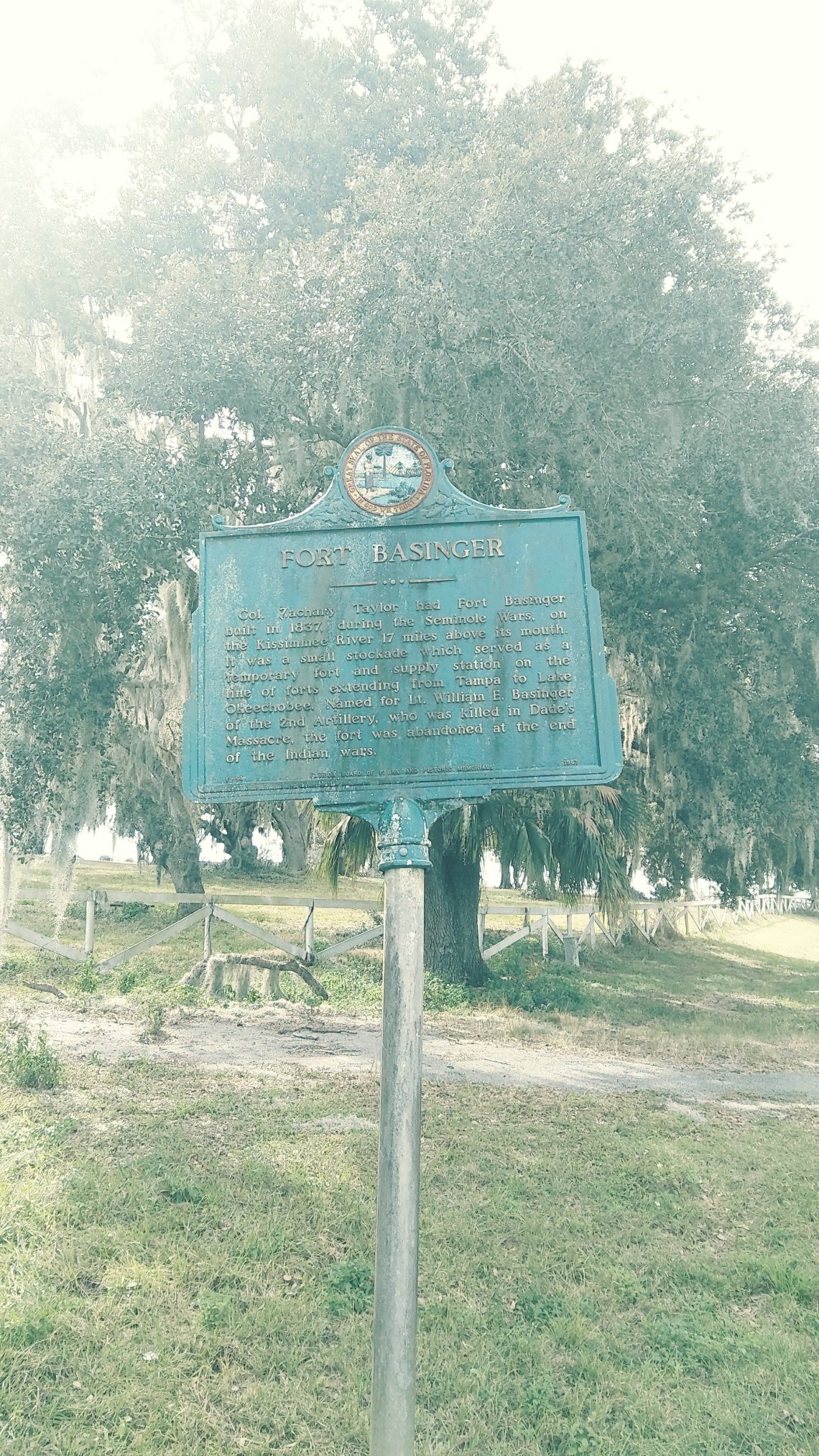 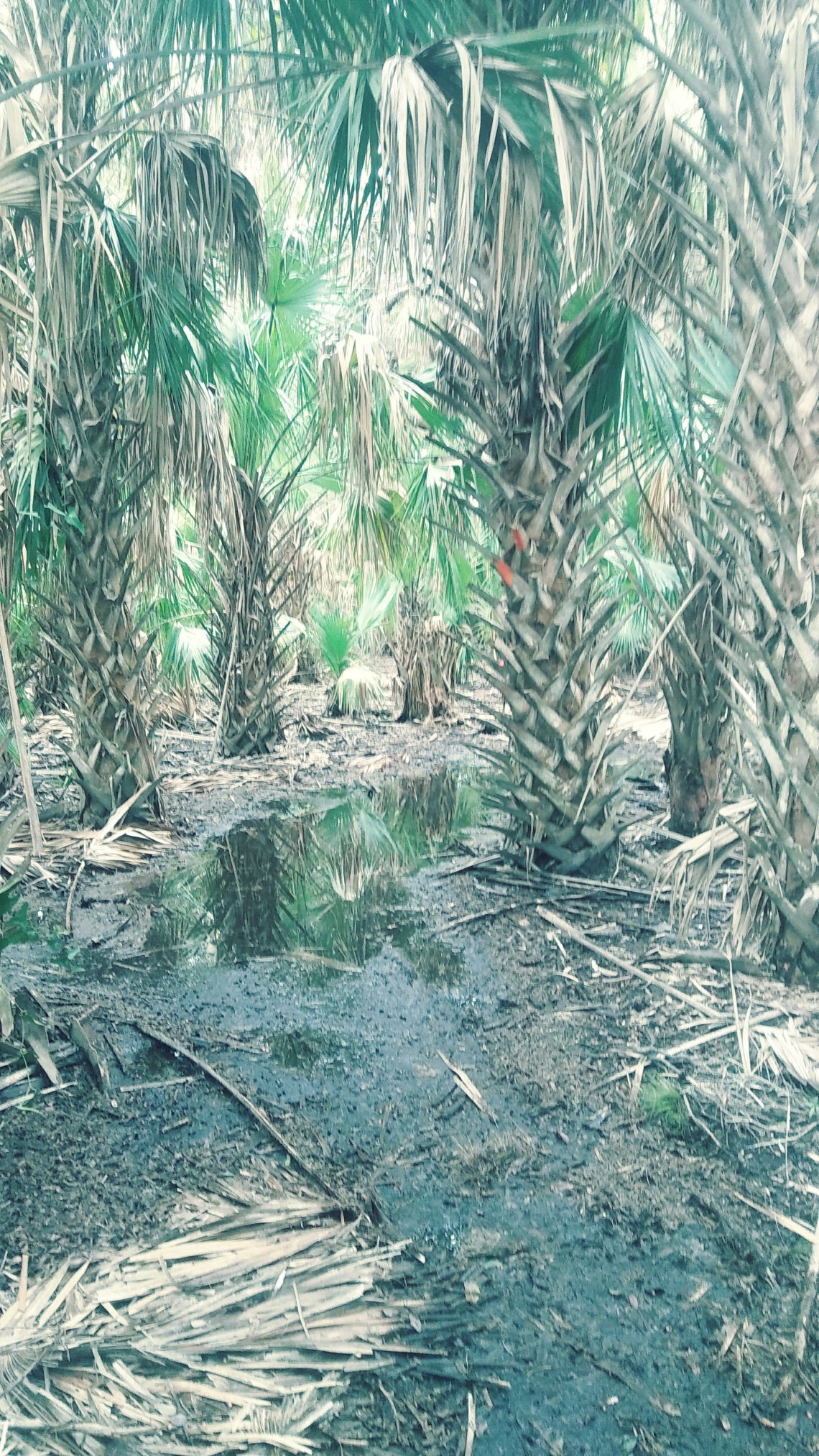 the wet ground from today, more and deeper is in-store for tomorrow 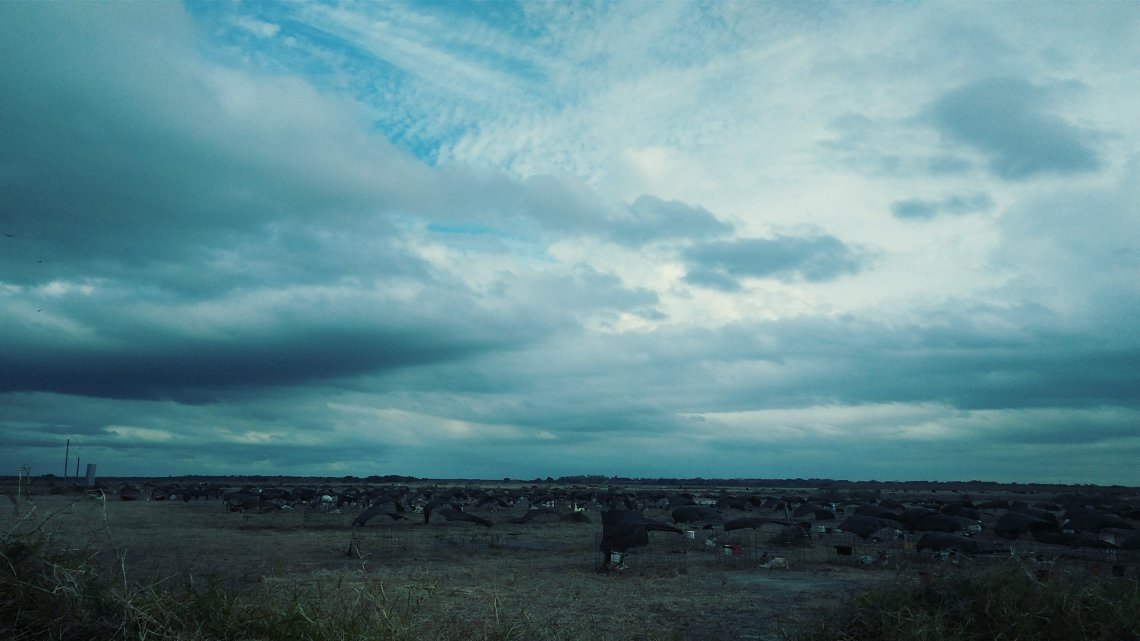 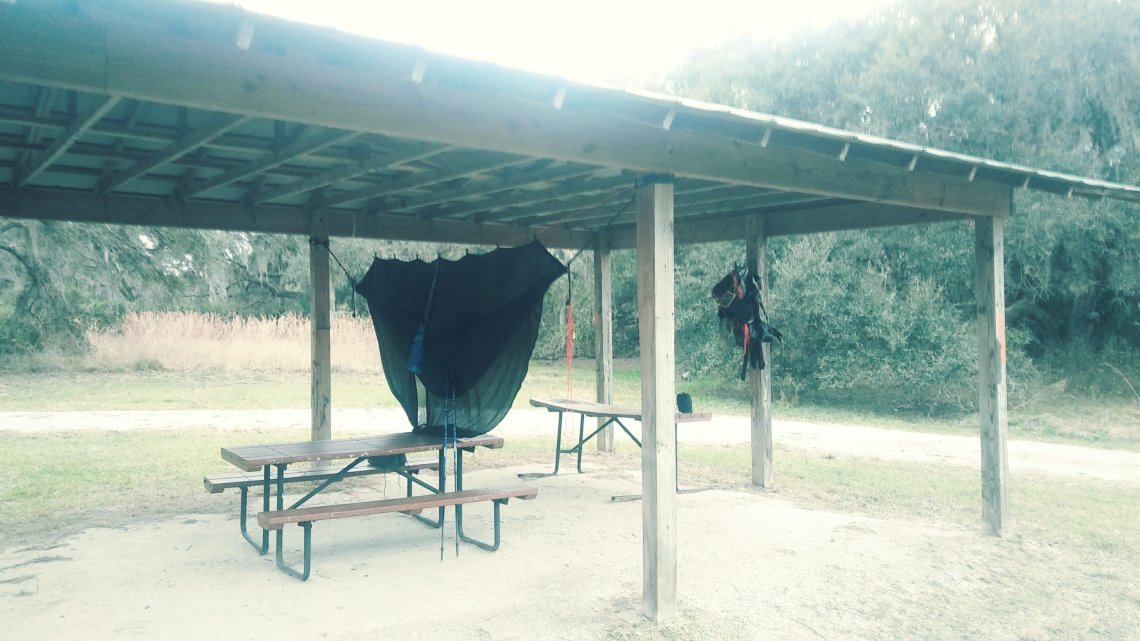 One of the very few shelters on the trail. Notice how high I hung my hammock. I’m ignoring the critters and sleeping tonight. (Except panther noises, I’ll react to those:))