I heard a new critter noise that I haven’t heard before. I tried to make sence of it as I laid there in the dark by the swamp, swinging helplessly in my hammock. The best way I can come up with to describe it, is as if someone is trying to whistle but can only get the air to blow through their lips. The animal would do this 6 or 7 times in a row then wait for a minute (like it was catching it’s breath) then do it again. I don’t know if alligators do that or maybe a large bird, a pig, or maybe one of those wild cows from the woods. I just couldn’t place it to a known animal sound in my mind, so I laid there and waited for to try and whistle further down the swamp before falling back asleep.

I woke up to an actual alam this morning at 5am. I knew it was going to be a long day and I was dreading the 10 miles of road marching, so I wanted to knock it out as early as possible. I tore down camp in the dark and started on the highway by 6am, just to spend the whole morning trying to keep my hat on as the semi trucks roared past with their wind wakes blowing hard around me. I don’t remember much happening during those 10 miles, other then looking forward to it being over.

As I got to gate of the Totsohatchee WMA I let out a loud “Woo!” As the 30 mile road march was now behind me, and never to be done again by me :). I didn’t even mind that the first 300 yards was ankle deep water or the fact that it was about to rain. Life was good again as I was in the woods where I belong.

The hike through the Totsohatchee WMA is what I pictured the Florida Trail to be. It is all mostly lowland swamps with cypress trees and palms in every direction with a narrow trail that the swamp was trying to reclaim. I really enjoyed the second half of my hike today and met a couple of other folks out enjoying the weekend in the woods. The first humans I saw were a young couple with the guy wearing a backpack and the gal carrying a water bottle (this is important later). We said “hi and howdy” to each other as we passed, then carried on our ways. I hiked through a section called the ‘Ancient forest’ that had old cypress trees growing out of the muck and hiked a few miles further through swamp land before coming up on another fella hiking towards me. As we met, we talked for about 15 minutes about the Florida Trail and what section I liked the most so far (the Kissimmee prairie) among other things. He told me he passed Ed and Nonsense eailer and that Nonsense had a cut on his forehead from a fall. We finally parted ways and I walked a few miles to a section called the ‘cypress swamp’ which was a muddy, calf deep alligator hole that was about 50 yards across! I took off my socks and shoes and in I went, scanning the waters for any sign of movement. I made it safely across the water passage and checked the time while I dried my dirty feet. It was 3pm, so I knew had three and a half hours to make the last 5 miles before dark. As I was sitting there I see that young couple from eairler headed my way again, from taking a loop trail around me. I asked them if they were okay or needed a map because it’s a long ways to the next cross trail, but the guy ensured me and the gal that he was pretty sure he knew where the car was. After they headed into the cypress swamp I checked my phone and couldn’t find a parking area within about 10 miles. I hope he has a tent in that backpack and that water bottle has enough water for an overnighter, because I don’t see them getting out by dark. About a mile further down the trail I ran into a French guy who didn’t speak English headed down a dead end trail. As he turned back towards me I tried to talk to him, but the best we got was that we both thought it was a beautiful day despite the rain.

As I came out of the woods, the trail cuts through a town before joining the woods again on the far side. It’s a small run of road, less than a mile, and cuts across the main road into town. Somehow the timing was just right that Nonsense passed in a car just as I was about to cross the road! He yelled out the window “glad you made it out, brother” as the car he was in drove past. I guess he’s going to take the night off to get out of the rain and to heal up. What a crazy day! 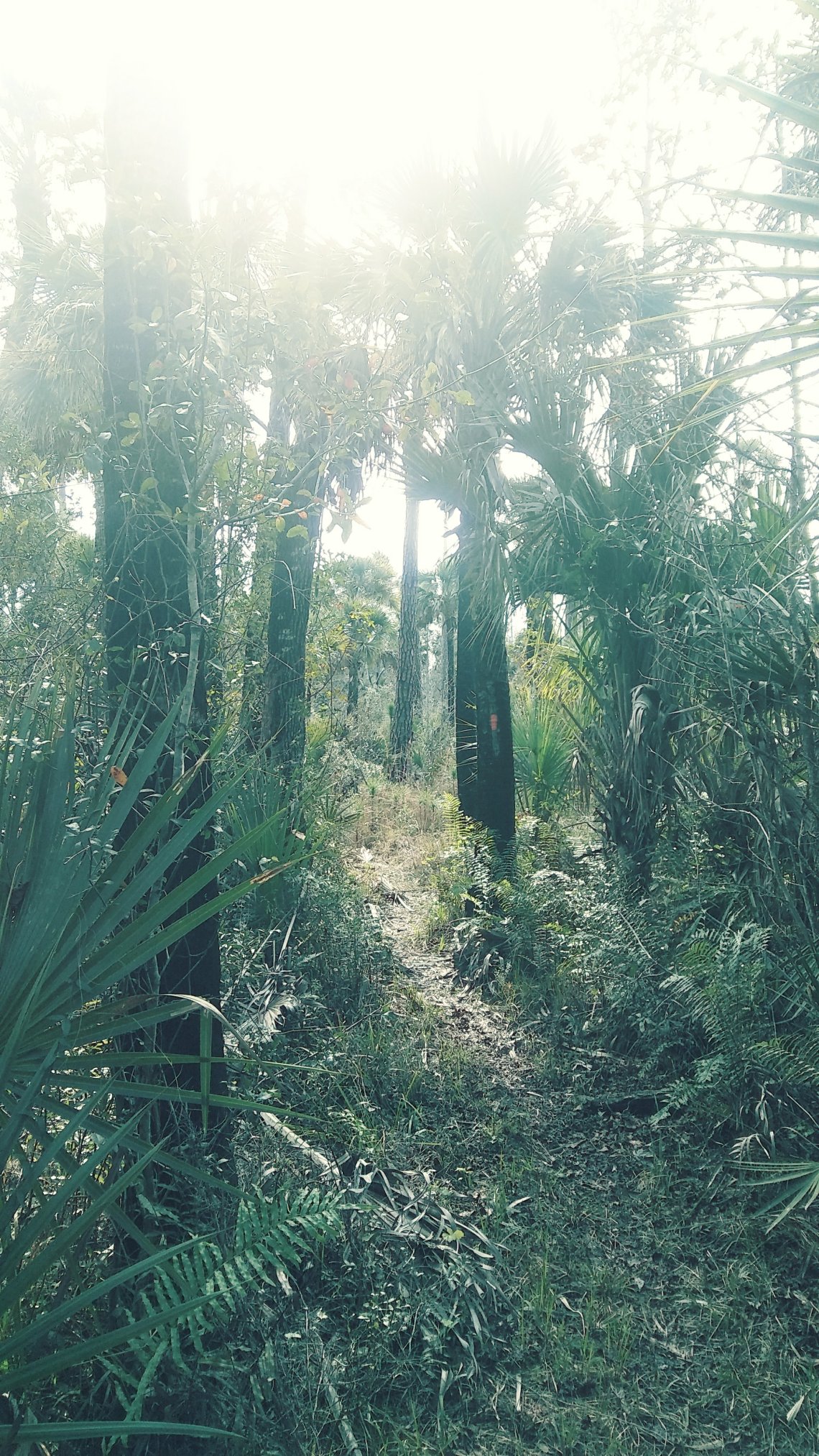 my kind of trail

leaning against this giant cypress are my trekking poles that have been photographed atop Mt. Baker and Mt. Rainer, this photo is just as significant

the cypress swamp of excitement

Now THAT is a name

hiding from the rain that has been on-again off-again, but expected to be steady for a bit