Lastnight was pretty peaceful sleeping on the point with the creek bowing around me, which made me feel secure and relaxed in my spot. The only sound I heard was of a critter on the far side of the creek bank that fell down as it was trying to get a drink of water. I think it was a racoon, due to sounds it made as it tried to get out of the water and scramble back up the steep sandy bank :). The rest of the night was quiet until my alarm went off at 5am. I knew I only had 15 miles for the day (and most of those miles were on the paved path through town), but there was thunderstorms forecasted at 2pm, so I wanted to get an early start and detour to a Target to see if they had pack covers.

I tore down camp and packed my bag by 6am and walked out of the stealth spot right onto the trail. My little LED flashlight was being more finicky than usual and requiring lots of shakes to keep it on, so I figured it’s due time to replace this thing. As I was walking through the thick stale air of the morning I thought of a shopping list since I was hitting a store today. I decided I need a belt (since I’ve lost a little bit around the middle), a patch kit for my rainfly (where I put the extra grommets has torn a little), a foam pad for my hips (my pack is eating away at my hips), and Valentine’s day cards for the wife and girls. I was happy with my list, it was short and simple, so the detour should be quick.

As the path led to town, it passed a subway restaurant. I’m not one to pass up a good opportunity, so I made a pit stop for 1000 calories of deliciousness and pressed on to Target. The store in my town has a big outdoor section, but I guess there isn’t the same demand for outdoor supplies here. There was only two short isles of basic stuff, but nothing I needed. The lady working there told me to go a half mile down the road to a Sports Authority and I’d probably have better luck. I thanked her for her suggestion and directions, spent 15 minutes picking out the best Valentine’s day cards and off I went.

As I got to the sport’s authority, I saw two hikers out front tending to their packs and injuries. For some reason I get excited to see other hikers and was quick to introduce myself. There before me was ‘Pearl’ and ‘Hawkeye’, a couple from northern California in their late 50’s and experienced hikers. We started sharing our experiences so far on the Florida Trail and a bit of what they had done before. Pearl hiked the PCT before and Hawkeye has hiked a lot, but I don’t know what trails he’s through hiked. We talked a lot about Big Cypress, alligators and other exciting moments, then we talked about how mean the folks in Oviedo were. Pearl was told she couldn’t fill up her water bottle at a dog park, and I shared my story about “the Grove” (they must covet their water in Oviedo) and we talked about the coming storm. Pearl needed a pack cover like me (they don’t sell them here either) and Hawkeye picked up a poncho. I told them I was going to try and beat the storm to “shelter camp” (a three sided shelter) and they said they might try for there or get a hotel. My original plan was to get a hotel too until I found out the cheapest spot in town was $160!!. I’ll get wet and deal with the storm to save that kind of money :). We wished each other good luck and happy travels while I went in the store and they threw on their packs to hit the trail.

In the Sport’s Authority I found a cheap poncho to put over my pack, a bright little flashlight (400 lumens), a patch kit, belt and a sleep pad that I trimmed down to make a hip protector. After packing everything up I saw a metroPCS (my phone company!) across the parking lot. How awesome, my phone has a cracked screen, drains down battery power and does weird things like calls folks, changes settings, opens apps, all sorts of stuff with the screen locked. I walked in to be greated by a guy that wants to hike the AT, so I was in good company. We decided on a phone that takes good pictures, and has a stylus for blogging and was in and out of the store inside of 30 minutes. Man, I felt pretty accomplished for today’s detour! Now to get to that camp before the storm hits!

As I was walking the path, I saw a McDonald’s and thought I could eat real quick, plug in my charger for a bit of juice and use their WiFi to let my phone do all it’s updates and get my apps loaded. Well, ‘real quick’ turned into an hour, but I did get to talk with an older gentleman about hiking for a bit before he reminded me to get to hustling or else I’d be having a wet afternoon.

I put my fast feet on and started cruising down the path at an easy 3mph and figured if I could keep that pace, I should make camp by 4:30. The storms were to start at 2pm or 3pm depending on which weather app was used, so as it was, I’d only have 2 1/2 hours in the rain max, but I kept my pace up to cut that down a bit. The miles were ticking by just fine, but the air was still thick with humidy and the temps were in the low 80’s, so whether it rained or not, I was getting soaked with sweat. I could hear the thunder rolling in the distance, but I was always just in front of the rain and I made it to camp just shy of 4:30pm, no worse for wear, and my gear was dry. I turned around to see the dark billowing clouds a few miles to the south and I sat down at shelter camp to relax with a liter of water, a smoke and a pretty view.

I set up camp and hung my sweaty clothes up to dry and layed around for a bit more. Here at Shelter camp I don’t have good signal on my phone (which I hope is storm related) but I also know that there isn’t much signal in the Ocala National Forest, were I’ll be for the next several days. As darkness fell, I was still the only hiker at shelter camp, so I guess Pearl and Hawkeye took to a hotel for the night. Maybe I will see them again, or maybe not, but I’m glad I bumped into them today. 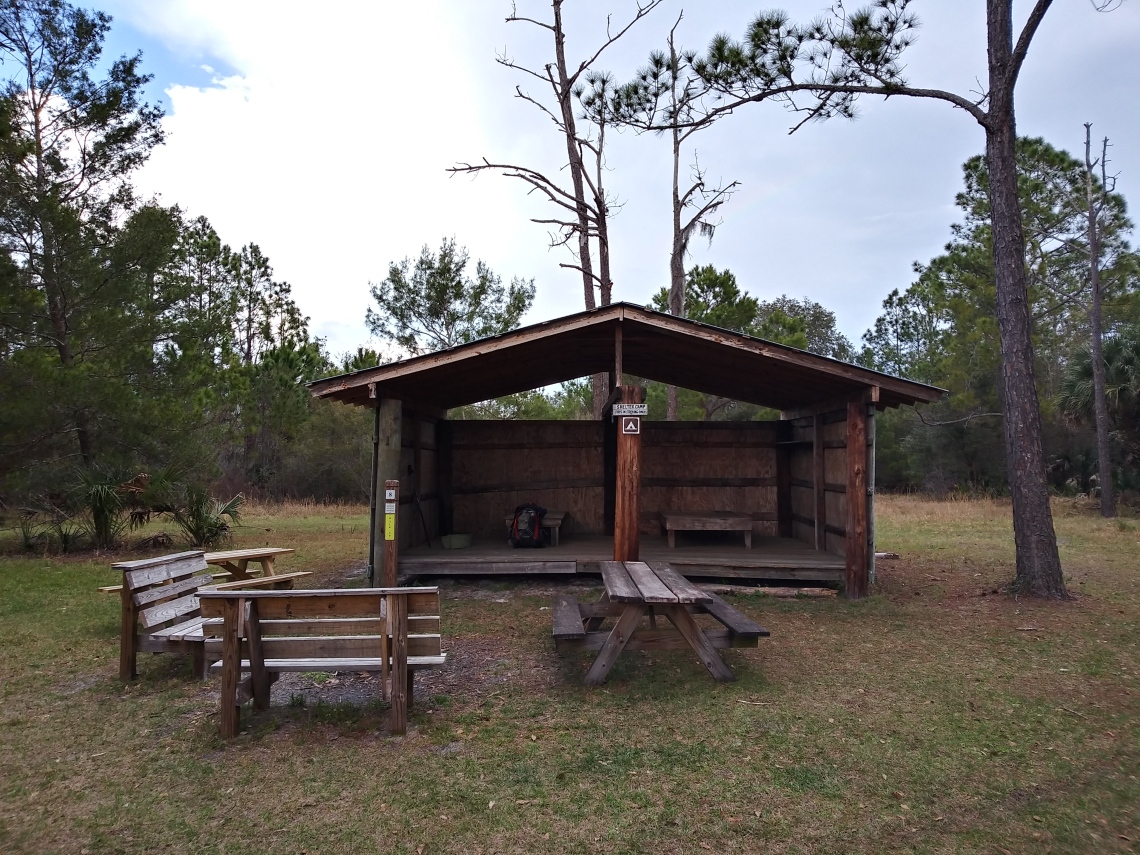 Shelter Camp is all mine for the night 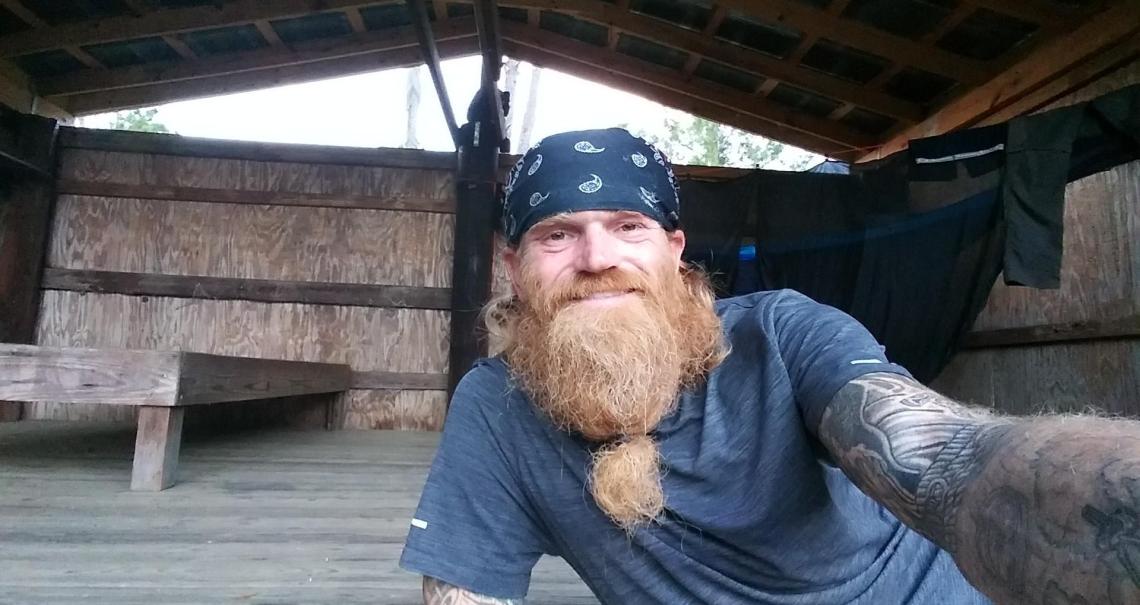 My dad asked for a selfie at camp, this the picture he got 🙂 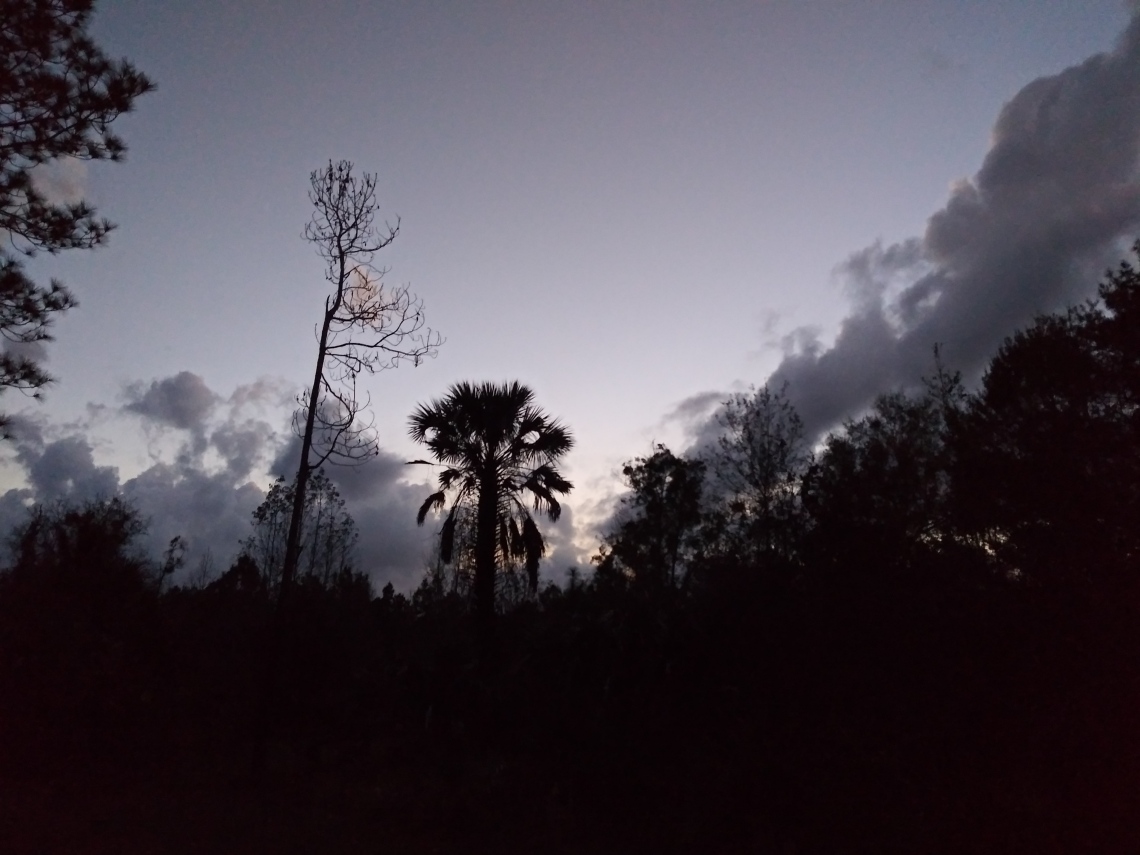