Sleeping in the motel was definitely better than sleeping in the below freezing temperatures outside, but since this is Florida, my room only had an air conditioner to make my room cooler. It did have a little plug in space heater (the kind that you put on your desk and it wisps out a light breath of warm air), but again, it was a nice escape from what it could have been. I was also able to get a shower in, which was much needed, but there was no laundry service, so I had to put my stinky clothes back on. At least my hair and beard are clean and tangle free :). The bed was very comfortable too, but for some reason I missed my hammock and sleeping bag, and I ended up wrapping myself tight in the blankets to get that “squeeze” I’m used to.

Morning came quick, like it always does, and Gray Beard was itching to hit the trail by 7am. I can appreciate his eagerness to see what awaits him on the trail, so I got up and drove him to his starting point and watched as he took off at his usual quick pace. Back at the motel, Mickey and I loaded up our gear into the van then stopped at a coffee house for a breakfast sandwich before we drove to the other end of the trail head (I know, I’m really ruffing it lately, huh?). It was still a little chilly as we set our stride, and we hiked our first two miles as the sun worked on warming up the air around us.

Our first break was at Shepard Spring. It is a beautiful spring, set off deep in the woods with a little bench there at the end of a short boardwalk to sit and stare from. The water was crystal clear and I could see schools of little fish swimming around, trying to avoid the larger gar fish. To the right, a baby alligator had seen us from his log perch and was making a little barking noise, while the big momma gator laid still on the bank, keeping an eye on things. The sky was clear and blue while the sun was shining it’s rays into the glimmering teal water, making it one spectacular spot to have our first break.

The rest of the day would fail in comparison, but was a nice hike just the same. There is a spot called “the cathedral of palms” where in a few acers of forest the only tree that is growing there is hundreds of large palm trees. It too was a pretty sight, but the ground was mucky, so I really had to watch my step to keep the water from filling my shoes. One of the last break spots (in the woods) was atop a large sawdust hill from a logging operation years ago. We knew it was there from the map app, and had fun trying to find the least appealing of all places to take a break. But we found it, climbed on top, and took a break enjoying the view from “sawdust hill”.

After we left the woods, it was a 5 mile bike path that would lead us back to the river where we left off yesterday. It was a quiet walk through a tree tunnel that was hardly used except for a few folks walking their dogs. Gray Beard was waiting on us when we finished our miles and we sat around figuring out the next few days before heading off to resupply and set up camp. All in all it was a great, short milage day, and the last of the sub 20 mile days for awhile. Our plan is to push hard until we emerge from the Apalachacola Forest and then reasses the schedule. Hopefully it all works out, but if not, we will figure it out :).

As for now, I’m back in my warm sleeping bag, swaying in my hammock as I watch my breath leave my body in a misty cloud. It’s the last of the cold nights for awhile and after tonight, the lows should be around 50 degrees, instead of the low 30’s and 40’s that it has been. It’s about to get hot again in Florida, and I’m ready for it 😉 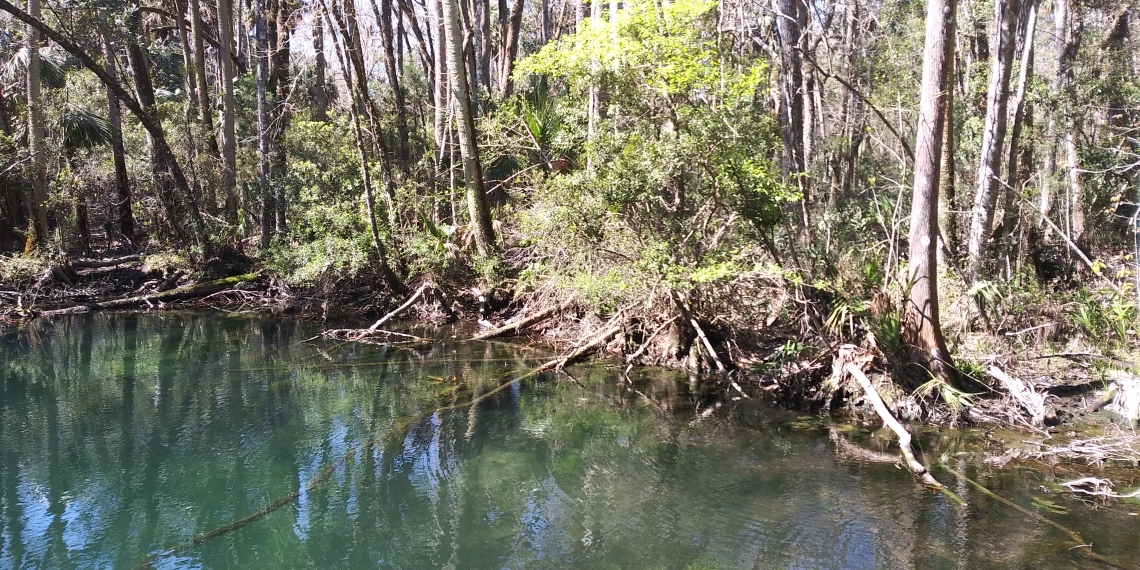 Momma gator is centered on the bank, slightly obscured by a log 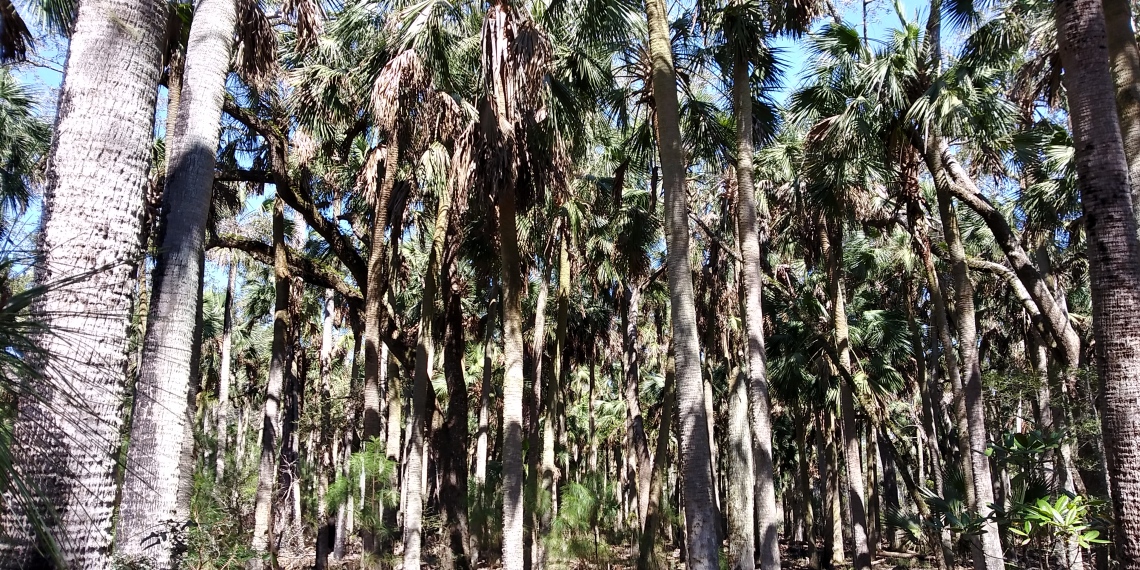 The Cathedral of Palms 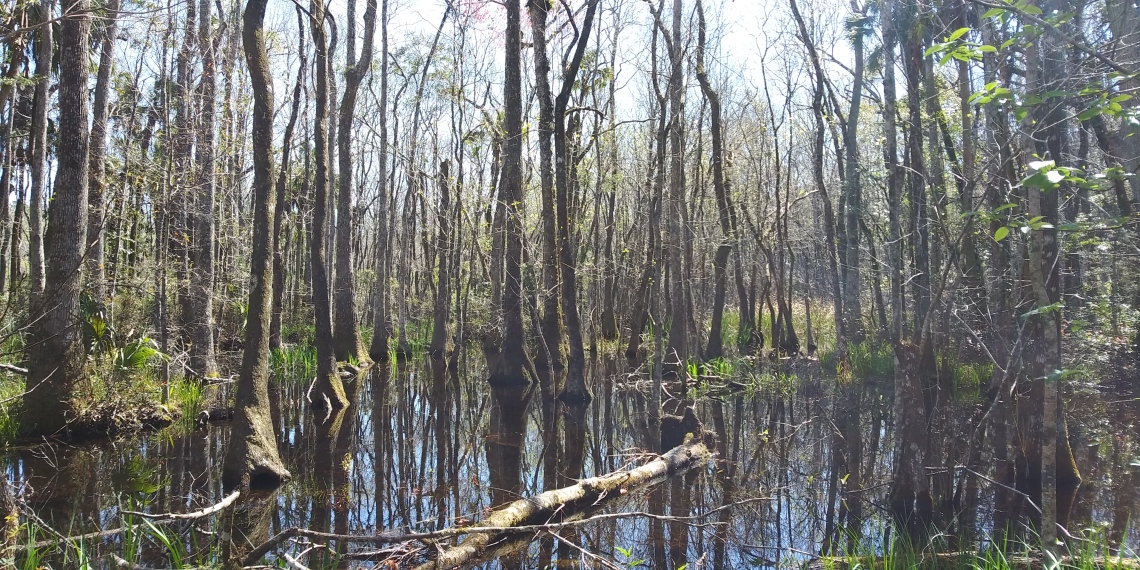 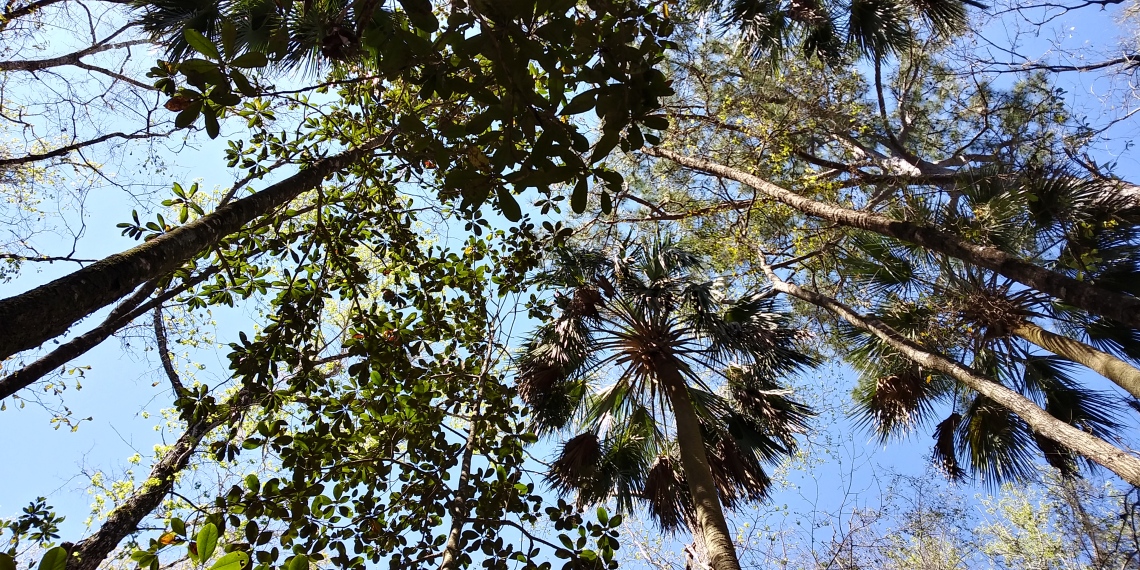 Looking up from my lunch spot