I had a hard time falling asleep lastnight as I tossed and turned until just after midnight. I’m not sure why I couldn’t turn my brain off, and I struggled with staying asleep as I woke up randomly during the few hours that I did sleep. When my alarm finally sounded and it was time to get ready, I felt no more rested then when I first laid down. I think my body wants to be in my hammock again and back in the woods.

Today’s 15 miles are scheduled along a main 4 lane road for half the trek then the rest of it is down a paved country road. The road marching still isn’t much fun, but it’s the people you meet along the way that make it a great experience and break up the monotonous miles.

It all started on our first break while we sat in front of the Dollar General store having a smoke. A guy pulled up in an older car and kept looking over at us. He finally got out, went inside for awhile and as he came out of the store, he came up to us with his wallet open and pulling out some cash while saying “I know how it is, I’ve been there before myself”. We hurriedly refused his money and explained why we look and smell the way we do, but he got in his car not quite believing our story. Now, here was a man with no signs of having expendable income, who’s home must have been affected by the hurricane, but was reaching into his wallet to help perfect strangers who by all accounts appeared down on their luck. It was a humbling experience to have.

On our second break, a guy in a truck (on the four lane road) got hard on his breaks and pulled into the parking lot of the storm damaged and closed store we were at. He just wanted to tell us that he’d been talking to Grey Beard a few miles up the road (taking shelter from the brief rain) and he wanted to let us know that we were only a mile away from him (nice guy number two).

On another break, a guy pulled over to make sure we were doing okay and offered us snacks and water while telling us about his two ex-wives, life in the 60’s and planting trees :). He was a fun character to talk too and made for good company during our brief encounter. Then, a few miles later as we were hiking, a lady pulled over on the side of the road and waved us over. As we approached her car, she asked if we “liked Italian bread”? She had “just come the Wal-Mart and the loaves of bread were on sale for 30 cents a piece, so she cleaned them out”! We decided to take a loaf of bread, and we chit chatted with her about raising wolf hybrid dogs and how bad the storm was before pressing on. A few other folks even slowed down along the way to ask if we need a ride or anything else, but we let them know that we were hiking on purpose. As we neared the end of our miles (only two left in the day) we got to a yard with a sign that said “Hikers, stop here for a pit stop” with two chairs, a trash can and a mini fridge filled with snacks, medical supplies and other odds and ends. We were ready for a break, so we sat and enjoyed their set-up for awhile and left a thank you note for them.

We ended our day back at the Church where dinner was waiting on us. They were heating up leftovers for sandwiches, so we pulled out our big loaf of Italian bread and I sliced it into big thick slices for the sausage, pork chop and chicken sandwiches. It’s hard to believe how strongly this community is still coming together and is so helpful towards one another and to us, perfect strangers just passing through their little towns. If you think the world has losts it’s kindness, come spend a few days around Fountain/Altha Florida to see Southern hospitality at it’s finest.

The morning sun is up, letting us know we should be hitting the trail (road) soon 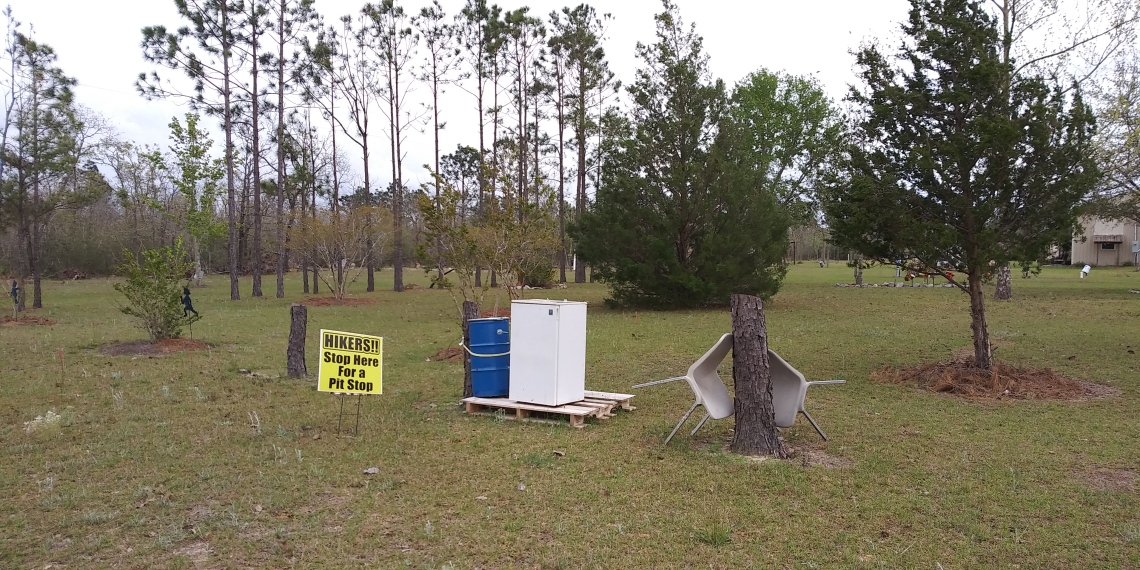 A friendly stop along the trail, perfectly placed right about where we needed a break

Things a hiker might need, right there at about the time they would be needed